The Tower of Destruction 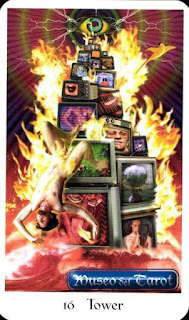 The Tower of Destruction is one of the Tarot cards that, when thrown in a reading, evokes groans of “Oh No” or other expressions of fear and dread.  You can see why.  As an image, it is the epitome of doom and destruction.  A large tower rises out of what appears to be a firm foundation.  Lightening bolts have hit the top of the tower. Fire explodes out around it.  Two beings are falling upside down to the rocks below.

The Tower is definitely about change.  When it shows up in a reading, you can expect that things are not going to be the same.

The card before the Tower is the Devil.  The Archetypal Fool on his Journey through the lessons of the Tarot just had all his monsters and demons, fears and phobias crawl out from under the bed, so to speak, and scream in his face.  He had to be consumed by them or triumph over them.  It was a real dark night of the soul.  Having survived the Devil, the Fool has proceeded on the Journey with some hope and renewed confidence.

Then, the Tower happens.  It hardly seems fair.

And yet, the Tower falls.  Absolutely.  This is not the kind of change that comes from picking up the reigns in the Chariot and thundering down the road in glory.  Nope. You just had the rug pulled out from underneath you.  Question: maybe you got a little bit of a warning about this?  Didn’t you just dance with the Devil?  Did you think things would stay the same once you dragged those demons out of the closet and had a few go-rounds with them?  Do you really want to do that again?

Or maybe you didn’t meet your Devils recently  - or don’t think you did.  The Tower represents those rock hard places in our lives that we think are permanent, protected, perennial.  We worked hard to create this place that glorifies our accomplishments.  Who would dare to dash it all away from us, casting us out to fall from these glorious heights like Dante dropping into hell?

Well, life happens.  We get our little warnings.  We ignore them, hoping they will just go away.  Yes, we know our spouse is acting strangely and telling lies.  But we don’t really think they are cheating on us - not till the big announcement “I found someone else. I want a divorce.” is made.  We are shocked.  “It just happened like a bolt out of the blue” we say.  Uh-huh. That “bolt” is a Tower experience.  Now what?  Life as we know it just came crashing down around us.   We are afraid, angry.  We panic. We fall down and feel helpless. Perhaps it is the day you get the pink slip at your job and find yourself packing your personal items into a banker’s box and going home in the middle of the morning.  Maybe your best friend just double crossed you.  Maybe you got rear-ended on your way out of town for a vacation.  You get the idea.

In one Tarot deck, the Tower is depicted by a cat who has jumped up onto a beautiful dining room chair to avoid the vacuum cleaner going by.  Glaring at the vacuum cleaner, the cat doesn’t realize the chair is tipping over and will fall.  No sanctuary.  Will the cat land on its feet?  Where will it run to?  Safely under the bed?  Or will it get outside and bolt off into new dangers?

In another deck the Tower has a large crown on top that is now tilted precariously on the block of stone dislodged by the lightening bolt.  Perhaps that crown represents the ego?  Or a current level of consciousness being pushed aside so a new one can enter?  In the Osha Zen deck the Tower is the outlined figure of a person sitting in a half-lotus position with lightening bolts emitting out of the crown chakra igniting the individual chakras like bonfires as two small humans fall away.  Might this represent the fall of our human duality to jolt us into a place of feeling our total being?

Perhaps my favorite Tower card is from the Cosmic Tribe Tarot.  The Tower is made of televisions that are all on fire.  As the man falls from the Tower the expression on his face is pure bliss.  Ah! At last!  Free of the old re-runs of his life that kept him trapped in late night talk shows of the monkey mind.  When one show is axed, new programming can take a turn on the airwaves.

Other images of the Tower include the Goddess Pele as the Purifier.  The Goddess Kali for shattering the structure.  Even the Grail Knight who finally found the Holy Grail at the altar of the Temple of Solomon is picking up the Grail just as lightening hits the temple and it falls around him.

Gee, is nothing sacred?

I have been dealing with my own Devils lately.  Lethargy.  Depression.  Fear of getting older.  Being in denial of a shoulder injury and extra pounds.  I finally got to the point of “oh enough is enough. Just DO something about it.”  And so, at the beginning of the Labor Day weekend I made a commitment to get back into my exercise routine, spend a good amount of time in my kitchen doing food prep that would encourage me to eat better meals.  Give the house a good cleaning.  Get the energy moving again!  I was really psyched up about it.  “YES!  I am DOING this!”  So I went out Saturday morning, walked just short of two miles, fell down and sprained my ankle.  I was Towered.  I thought a lot about it as I laid on the couch with my ankle on pillows and ice.  What happened?  I made the best of it.  I wrote another chapter in my book, read half of the current novel I am indulging in, petted the cat.  I did not fall back into that negative mind set I had been wallowing in for weeks.   It wasn’t until Monday night that I realized what had happened: I just had a classic Tarot lesson!  I fought with my Devil and overcame the current challenge.  I was Towered to give me the opportunity to move all of these experiences out of my patterned life and move up into a higher consciousness.  I laughed at myself.  All these years reading the Tarot and it took me this long to figure it out?

Whatever events in your life make you realize you have “been Towered,” have faith in the process.  Yes, it will probably be difficult.  No, it is not the last card in the deck (#16 out of 22) so you will recover and go on.  It may be a great trial or another of those
“*#-ing growth opportunities.”  Big or small, a Tower event can be embraced as a process that, while not of your choosing, is really helping you along your journey.   We will experience the Tower many times in our lives.  The Tower is about the fall of our dependence on the material world and the rising light of our spiritual life, as shown by The Star.

The Star follows the Tower in the deck. It is your Guiding Light, your ability to see where you are going.  Once the smoke and debris from the Tower clears away, you find yourself bathed in this pure Light of Spirit to lead you as you get up, brush yourself off, salvage what you can, and go on.  At this point, you probably have a lot less baggage.  You might miss it, and wonder how you will get by without it, but oh, that Light!  The Star is so beautiful and you follow it.

Spirit is always there to guide us, to lead us, to give us hope. And, thankfully, we have the Tarot to help us figure it out.

Posted by Kathryn Ravenwood at 11:27 AM