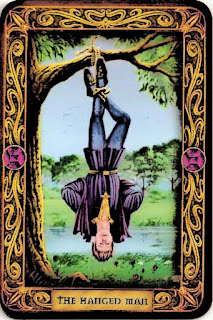 John Lennon was a great advocate of freedom.  He reminded us of a basic truth when said, “Yes is surrender...you’ve got to, you’ve got to let it go.” (from Mind Games).  Surrender and Yes in the same context?  Surrender brings up images of waving the white flag in defeat, giving up, giving in.  We tend to think of those images as restraint, not freedom, “no”, not “yes”.   What did you mean, John?

In the Tarot the Hanged Man has surrendered.  The card depicts a man suspended from a horizontal branch over an abyss, held by only by one foot tied securely to the limb, the rest of his body hanging upside down.  One leg is crossed over the other, his hands are behind his back.  Clearly this guy is not in control of the situation - or is he?  Was he kidnapped and tied to that branch or did he get his friends to do it for him?  “No, really, dude - I WANT you to tie me here, dump me over the edge and then just leave me hanging...”

For many of us, the very nature of our lives is based around structures that reek of control.  We have deeply engrained patterns of how we expect things to be and how we react when things don’t happen according to those expectations. When we don’t get our way, when things don’t turn out the way we planned, when the relationship isn’t working, we want to be in control - to get the outcome we desire. We engage in an endless conflict of pushing to get what we want and the other person or situation pushing back. If we don’t push hard enough or at the right time, if we lose the game, we end up desiring control even more, banging our heads against the wall (sometimes literally), repeating the same patterns, looking for the same wrong answers.

The Hanged Man is the Tarot’s answer to this cycle - the surrender of the ego to the higher wisdom, the Divine within us. In the Book of the Runes, Ralph Blum gives a beautiful depiction of Odin, who for nine nights hung upside down from Yggdrasil, the World Tree, “wounded by his own blade, (his ego? His need to control?), tormented, unaided and alone.”  From this place Odin spied the Runes in a pool below him.  “With one last great effort he seized them, and fell.”  He fell into Divine Wisdom.  This is the sacrifice of the Hanged Man. The horizontal limb he is tied to is the ego, controlling mind and the patterns it creates and binds us to.  It takes a radical shift, a surrendering, to drop out of that known, prescribed thought process into the void of possibility, new wisdom, and ultimately rise up to cosmic consciousness.

It is like playing a music or movie CD that has become scratched or otherwise damaged. When the laser hits that spot it can’t go forward, and gets stuck, skipping back and forth over the flaw, preventing the song or movie from playing out.  Seems like it always happens to our favorite CD, too.  Dang!  We try to fix it but nothing works.  Eventually we just have to accept that the CD is defective.  We can’t watch it or listen to it anymore.  We move on to something else.

Where is your life stuck?  Where are you pushing and getting the same negative responses or repeated failures?  Are you tired of it?  Ready to give it up? Contemplating surrender can be terrifying - if we let go of the patterns or expectations into which we have invested so much of our effort, our ego, our personal energy, then what will happen?  Who are we without this struggle?  We sometimes cannot imagine a different future than the one we keep insisting on that is not happening!  Yet, the Tarot says to Surrender, to Sacrifice the part of us that keeps us from realizing that there are answers out there - maybe just not the ones we wanted to hear.

Oh, and by the way, that Hanged Man is alone - he didn’t get to drag his uncooperative partner or co-worker along with him.  The only person you can change is - yeah, you know..... YOU.

We don’t have to tie ourselves to a tree and hang upside down for days on end.  But, we do need to let go.  Just stop.  Stop demanding, stop pushing, stop trying to control it all.  Relieve yourself of the burden of trying to hold it all, do it all, fix it all.  Let go of the hang-ups, let it all hang out.  “Let go and let God.”  Odin was “at the end of his rope” when he realized he was not alone...The Divine was right there to help him.

Surrender to the God-knowing within you. It might be uncomfortable or scary, but let go.  Get off the fence, look at things from a different angle, see what is staring you in the face that you never wanted to acknowledge or never could notice before.  And rise up to a new day, a new view, a new you.