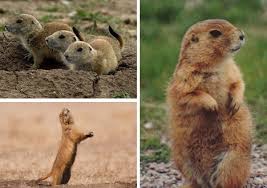 I came home from work the other night, opened the garage door, drove my car in, and heard loud, high pitched barking. I thought my neighbor's dog had somehow gotten into my garage and become trapped. I backed the car out and walked back in to even louder vocalizations. Then I saw a brown furry critter scurry from behind the freezer and around my cabinets; it was a prairie dog!

WHAT? How did a prairie dog get in my garage!? I called the city and was told to hire a pest control company. I walked around the corner to a neighbor who has a Critter Control truck in his driveway, knocked on the door and asked if he would please help me. He declined to do so.

I had a phone appointment in a short time so I could not deal with this most surprising guest until later. I opted to leave the garage door partway open, hoping the little guy would find his way out. After the phone session was over I checked on him. Not only was he still there, he was all curled up and asleep, tucked away in the back corner of the garage. I figured he was settled in for the night.
I started thinking about why this unlikely animal had showed up. Prairie dogs are all about community. Here I have a stranded and frightened loner, isolated from his family and way out of his neighborhood. There are three nearby colonies but they are certainly not in proximity. I live in a normal city block with streets and sidewalks and houses close together. How in the world did this guy get to me? What did this say about my own state of community? The city and my neighbor declined to help me. Have I isolated myself? Do I feel alone and lost? Am I hiding out, afraid to move?
I started calling friends for help. It was getting late and the next day was a work day. I felt badly about bothering people but I needed someone to help herd this guy out of the garage without him running behind the water heater or washer/dryer making it impossible to get at him. One of my dear friends agreed to help. She showed up wearing her boots, broom in hand. We both started laughing at the total absurdity of it all.

We tied towels over our faces (in case of mysterious airborne diseases!) and wielded our brooms. I shone a flashlight on my little guest who was curled up as tightly as it could, probably trying to be invisible. I pulled out the freezer, then started to move the cabinets which were so old and rickety they immediately began to fall apart. Oh- that woke up our little friend! Now he was hiding between the wall and the cabinets. I finally got an opening and started shoving him with my broom. My friend cried out, "don't kill it, Raven, or we will have to do ceremony for it!"  We were screaming and laughing while we herded it out into the open. Finally it broke free and ran as fast as it could out the door and into the night.

After gales of laughter my friend went home and I was left to clean up the mess. Droppings had to be swept up, the broom and floor bleached, the collapsed cabinets hauled outside. I kept saying, “Spirit, what does this visitation mean?” Within four days I had multiple and unexpected answers to that question – all about community, all about how I relate to people and how they relate to me. Some positive, some not so much.

What does Prairie Dog tell you about your own community? Are you hiding out, invisible, frightened and isolated? Have you showed up for a friend lately who needing some support? What barricades do you hide behind? Is it time to break free and run like crazy into the night?  Whatever it is, I hope you remember to laugh as you explore the teachings of Prairie Dog. Sometimes a sense of humor is all that keeps us sane.