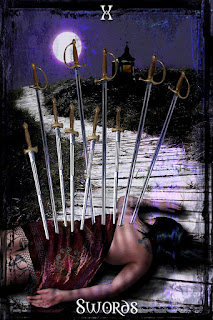 Art by Tammy Wetzel
Original  Writing by Kathryn Ravenwood
The Ten of Swords is one of the most dismal looking cards in the Tarot. We see a woman lying face down with swords stuck in her back. It would seem someone came up behind her to stab her not once but ten times. A bit of overkill for sure. Looking more closely we notice there is no blood. Why is that? The Swords of the Tarot are about the mind and truth, not the body, so we recognize this is not a physical attack but rather one of the mind. No one thinks inside our heads but us – or do they?
Each of the swords in our lovely lady’s back represent thought patterns she has accepted and incorporated as truth. Where did these swords originate? The mind is a field to imprint; it accepts what it is told. We are so influenced by outside voices – parents, teachers, media, friends and lovers it is sometimes hard to tell if we are thinking our own thoughts or those of someone else. When we are young we are totally vulnerable to “programming” and as we age we use that programming, and how we learned to make decisions based on that programming, to go forward into our present thinking. Continual reinforcement of thoughts and patterns habituates them. The negative ones continue to sabotage us until we are like the woman in the card - finally felled by the many painful and killer swords.
Powerful clues are revealed in the card. First, the woman is face down. This indicates that she is not looking at or perhaps even aware of the swords; they are behind her; she “didn’t see it coming” and has not “faced up to them.” Second, she has fallen on a moonlit path that meanders upward and on to the full moon. The moon is very much about our subconscious. Its Hebrew letter means “the back of the head” referring to the brain stem and lower brain functions, including instinct. The kind of thinking we are talking about here is not based on conscious awareness, and is not being cultivated in the higher brain at the front of the head. The moonlight is a reflection of the sun or life giving force. How we have lived our lives – in our heads in this case – is a reflection of what we have been told to think or chosen to think. The moon calls us to crawl out of the depths of that lower mind and follow the path to our higher consciousness, suggested by the structure at the top of the path that is only partially visible. At any rate, our girl in the card is flat on her face with a long, long ways to go.
Another clue is that the swords are in her back, along her spine. We are reminded that our mental programming becomes very integrated by the nervous system. It takes effort and will to teach our nervous system not only to not pay attention to those swords and their consequences, but to learn to avoid them and accept new, positive thoughts. This is why we cannot say an affirmation for a week and expect things to change. To reprogram the brain and nervous system is like that path; we have to stay on it and keep a goal in sight, even when it is hard to see and only dimly perceived.
While this card can easily invoke despair and hopelessness, it really is a card of encouragement. The Tens in the Tarot are the end of a cycle. The Ten of Swords tells us this is as bad as it gets; the only way now is forward (up that moonlit path to higher awareness!) It is time to get a new ending to the story. To stop telling ourselves the same old programmed misery. We are the champions of our own mind. We can follow that moonlit path, step by step, higher and higher, until we have left those swords behind us.
The woman in the card is beautifully dressed. Obviously she had been living a rich life when the 10 of Swords finally got her. She is not reduced to rags or poverty but she is being called to get up and step up if she wants to go farther ahead on her path. She can take all the good thoughts with her – all the positive and wonderful aspects of her mind and self-truth are forever. It is possible that because she has come this far on the path that she is able to learn to face the need to do this work.
If you are feeling stabbed in the back by old, worn out and destructive tapes in your mind, and want to reprogram your thinking, take heart. The road is long and goes step by step but, even in the dark, the moon lights our way to guide us through. As Tom Petty said, “the future is wide open.”
…Kathryn Ravenwood  03/28/17

Posted by Kathryn Ravenwood at 1:09 PM No comments:

Two of Pentacles - HOw is Your Juggling Act? 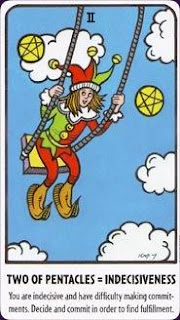 I have been stuck for over a month. Because I have been stuck I have been struggling to identify my feelings and therefore a way through the stuckness. Today I saw this tarot card from a deck I have never heard of and it was just what I needed. I have been on that swing too long. When I was a kid if I stayed on the swings too long at recess I would get sick and that is just about how I feel. Sick of the back and forth motion, sick of being up in the air, sick of not being grounded, sick of not going forward. Recess is over (for now); it is time to get off the swing and get back to class. Taking this metaphor a little farther, think of how it is to leave recess where nothing is really expected and get back in line, troop back to class, sit at your desk, get the text book out and back to work.  Attention, class!

The Two of Pentacles reminds us that we juggle so many things it can seem impossible to devote our full attention to any one project, thought, goal, or activity. Intentions we made and felt so committed to are now relegated to some forgotten corner of our consciousness. But, it is OK to be lost in duality (which the Two’s represent) and not move forward.

But are we really not moving forward?

Sometimes we have to process life. Maybe an injury or illness has forced us to put plans on hold. Maybe we are sad or some big distraction has sidetracked our goals. I have had plans for about 3 months to write a particular article that has never materialized. Because I could not seem to get that going I didn’t write anything! I read someplace that if you feel stuck, maybe you could just do something different. Give up on whatever is looming over you causing you to feel overwhelmed or inadequate or unable. Just do something else. Juggle things.

Pentacles represent the physical world and the realm where manifestations finally materialize. The Two of Pentacles is about learning to balance our lives and all that is going on in them. Let’s face it: most of us are on overwhelm most of the time just because we live in a world full of opportunities, stimulation, and expectations. We can’t do it all at once. This is where focus comes in to play. Choose something and do it. Just get going. Goals are not being met here but when we learn to allow committed space for one thing at a time we figure out what might not be important that we can let go of, what gives us joy that we want to make more space for, and realize that the housework is never done, the groceries always need replenishing, and yes, we have to sleep.

Here is what I found out about my latest time of being stuck. Stressing over not getting that one particular article written distracted me from all the other options available. I was mad at myself and so resulted to creature comfort distractions. However, in-between binge watching my latest guilty pleasure on Netflix and eating too many snacks, I DID accomplish things! Lots of things got done and most of them were even on my To Do List. I had quality, fun time with friends, participated in beautiful ritual, went to work every day, and maintained my usual routine.

True, I was not particularly creative but that is another Tarot card all together!

So if you find yourself on that swing of indecision, just enjoy the view for awhile.  Feel the rhythm of back and forth. You will get sick of it soon enough.


Posted by Kathryn Ravenwood at 10:57 AM No comments: