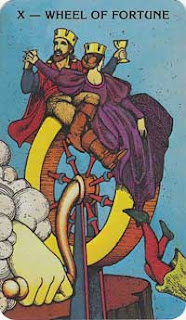 Earlier in January I wrote about 2017 being the Year of the Wheel of Fortune (see my blog: www.KathrynRavenwood.com or http://kathrynravenwood.blogspot.com/).  Now, only three weeks into the year, we are feeling the power of the Wheel as it spins. Spoiler Alert: I usually do not write on the Tarot from a political viewpoint but I am doing so today. Still with me? Then read on.

The ruling political party of our country changed hands and just one day later marches and rallies for women’s and human rights were global - the streets filled with an uprising of people not willing to be silent. Protests and marches against the misuse of our Earth’s resources – especially water – are going on right now. People are exercising their Constitutional Rights by taking action on their beliefs and supporting causes that are important to them. Many who have never marched, protested, written to a Congressman/woman before are doing so now. We are stirred up by the power of the Wheel and the vortex of energy it creates.

The Wheel is about change and “Lady Luck” can be an angel or a devil - what is fame and fortune to one is ruin and loss to another. In the above card we see a king and queen riding high on the wheel of success while at the bottom a poor soul has fallen off his turn at the top. A cosmic hand, partially hidden by clouds, cranks the Wheel. In time the king and queen will fall and someone else will rise. The clouds remind us we don’t know what is coming next.

Let’s use the Tarot to look at the big picture in the framework of the current four-year presidential term. Perhaps in this over simplified exercise we can find some perspective. 2017 is the Year of the Wheel (card #10). The power changed hands and is quickly making itself known. This is only January. We have 11 months to go.

2018, year two of the term, will be the Year of Justice (card #11). This card is often related to Karma and consequences. “What goes around comes around.”  When discussing a political situation we can expect to see legal activity. Justice is often depicted as a blindfolded woman holding the Scales of Justice, balancing actions and consequences. Not all laws are perfect or carry maximum benefit for all. What will Justice bring in 2018? As the saying goes, “Karma is only a bitch if you are.”

Year 3 of the term, 2019, will be the Year of the Hanged Man (card #12). Who will be hung out on a limb? Health care?  Clean water?  Education? This card is about surrender, letting go, not being in control;  however, the act of Surrender can be very powerful as it frees us from often self-inflicted limitations to open up to other dimensions of knowing, wisdom, and eventual freedom.

The last year of the term, following the linear path of the Tarot, is the Death card, #13. In numerology 2020 = 4, the card of the Emperor, but 13 is also a 4 (1+3=4) so we see an end and transition of the term in Death and an establishment of structure, form, and stability in the Emperor. What’s done is done and has become “written in stone” – at least for now.

Here are a couple of scenarios to ponder. The current president rides high on the Wheel in full power, the ensuing cause and effect of his actions is demonstrated in the Justice system through laws passed and repealed through the manipulation of truth. The Hanged Man could be the public, not in control and surrendering to the Death of a way of life that came before while the Emperor rises in firmly established power.

OR - the Wheel turns and the People rise up, taking their place of power. Justice is balanced by truth (real truth, not alternate facts), which causes the president to become the Hanged Man who must surrender and discover his lack of control, which leads to Death of his presidency and the rise of the new Emperor/structure that brings stability and new leadership.

2021, the beginning of the next presidential 4-year term, is a 5 – the Hierophant. In the linear progression of the Tarot, it is Temperance (art/alchemy) which is card #14 (1+ 4 = 5 or the Hierophant). Will the current president take on a second term morphing from the Emperor into the Hierophant of the Establishment  who acts as The Leader dictating us with rules, regulations, and pressuring us to conform to what the Hierophant dictates? Or will Temperance bring a blend of physical and spiritual awareness to create a world where we reject rigid rules and blind subjection to power without truth? Will the Hanged Man arise filled with new vision and expression or will he continue to hang ineffectively? Can we rise to a higher alchemy of The Art of Being Human?

None of us can control the big picture or the full effect of the Wheel but we can tap into its energy and momentum to get us moving. The Wheel may not bring us the desired outcome we bet on but we still have personal choice, free will, and the ability to gather information (facts) to move us forward. Each of our individual actions and movements contributes to the whole. As you ponder any number of possibilities and outcomes of the Wheel, Justice, Hanged Man, and Death over the next four years, remember that we have TODAY. We have NOW. We have freedom to speak and act, whether it is in the political arena or our personal lives. So while we cannot control the Big Wheel’s outcome, we can certainly grease the smaller wheels that cause it to move!