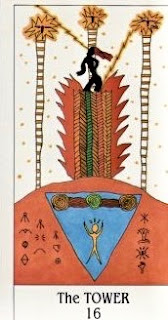 Oh, the times we are living in. Animals, plants, and habitats going extinct. Politics tearing apart the very core of what we have deemed to be decency and human rights. A tidal wave of migration sweeping across the world seeking asylum and the basics of living.  Financial upheaval.  Climate change renounced by fat-cat corporate moguls. Renewed attacks on women. It looks like our society and world are rapidly degrading.
Today the above image came to mind as if calling to me. I clearly saw this Tower card looming in my mind.  In it we see a female figure standing atop the Tower between three pillars, their tops aflame. Lightning strikes the Tower. On the verge of destruction, the forms so carefully built are imminently going down. This image can evoke fear of impending loss and doom or it can be a harbinger of better things to come.  But, either way, you can be sure that things are not going to stay the same. I always promote the Tower card as a great ally for us. Yes, it is very hard to go through the destruction and fall of what has previously been supporting us and unnerving to feel the solid ground beneath us quaking and buckling. Yet, without the fall of the old forms, the new cannot arise.
I find this Tower card one of the most positive and exciting of them all.  As one lightning bolt strikes the Tower another strikes the woman in her third eye - or is she perhaps emitting the bolt herself? There is an exchange of energy going on here; the Universe is blasting away the outmoded form while the woman is standing her ground, matching that force from within. This is powerful stuff!  I get the feeling she is going to ride that Tower all the way down; emerging from the shattered form with her will intact, her vision tuned to the creative forces of the Universe,  ready to hit the ground running, as the saying goes.  All she knows may have been shattered and torn asunder but she is the progressed and learned form of the Magician from Card I in the Tarot, ready and able to use her powers of manifestation to call forth a new beginning.
After the destruction, after the fall, the new can come forth. In this card, deep beneath the doomed Tower we see the form of a new, Shining Woman-Child waiting to emerge. The blue triangle is the Delta of Venus, the feminine pathway of life. The three sides of the triangle as well as the three circular forms above point to the three of the Empress card – the card of birth, the Mother, abundance, creation and creativity.
We all have Tower events in our lives that can challenge or release us, but I am looking at the global destruction that is so rampant today.  We can easily be overwhelmed with emotion, grief, anger, and even inertia to the events. Yet, we are living in it. We have to do whatever we can wherever we are called to help. And, I think we have to recognize the big picture. The old ways are going down.
What lightning bolts can you pull out of your Medicine Bag to, not just survive, but thrive in these perilous times? What power within you is waiting to blast forth; what creative gifts are within your reach? This is no time to doubt yourself!  The Tower is clearing away obstacles and barriers. As the external forms fall away, we have the chance to let go of the internal blocks  that might be holding us back from fully participating in the creation process.
I invite you to turn and face the storm. Howl back at it and hurl your own bolts of fire. Stand your ground in truth, integrity, and love. Hold your vision and your courage. Take care of yourselves and each other. Remember who you are: you are that emerging Shining Woman-Child of Magic.  Bring it on!